Just after 7am on Thursday, 22 November, 2012, Joanne Spaulding, Hobart mother of three children aged 12, 9 and 18 months, was preparing the family for a busy day like any other…

I fainted in the laundry as I was going about the usual school-morning’s business.  My husband, Glyn, managed to catch me, and stop me from whacking my head on the floor, and proceeded to sit me down on the sofa with a cup of tea.  He then went off to change baby Anneli’s nappy, and was about to leave for work, and drop off Delphine, our 9-year-old daughter, at the school bus on the way.  But just as they were preparing to leave, Delphine ran up the hallway shouting “Dad, Dad!  Mum’s asleep on the sofa, with her eyes open!”

Poor Glyn raced back to the living room to find me unconscious and without a pulse.  He immediately phoned the ambulance, and was guided through CPR by a wonderful lady, until the ambulance crews arrived just minutes later.  After about an hour and three quarters during which six ambulance officers administered a dozen shocks and two whole bags of drugs, I had been revived and stabilised enough for the ambulance to rush me to the Royal Hobart Hospital.

It was not at all clear that I’d survive the trip to the hospital.  I was 38 years old, healthy, and had no previous indication that anything like this would ever occur.

I had experienced what is known as a Sudden Cardiac Arrest (SCA) and spent the next two weeks in the ICU, where I was cooled for several days, and kept in an induced coma for most of that fortnight.  My family – husband, children, parents, in-laws – were told that there was a distinct chance that I would not be the same person when and if I came out of hospital.

But, amazingly, and thanks to an absolutely fantastic team of doctors and nurses, I did survive, and without brain damage.  (I do, though, have a bit of a memory problem now, which is apparently quite common.)

My family – all naturally quite distraught – were supported through this nightmare by the wonderful, very professional staff in ICU, and said that they felt I couldn’t have been in better hands.

I will be forever grateful to the dedicated, skilled people who work in ICU. Because of them  – and a wonderful cardiologist, paramedics, and of course, husband  –  I have made a full recovery. 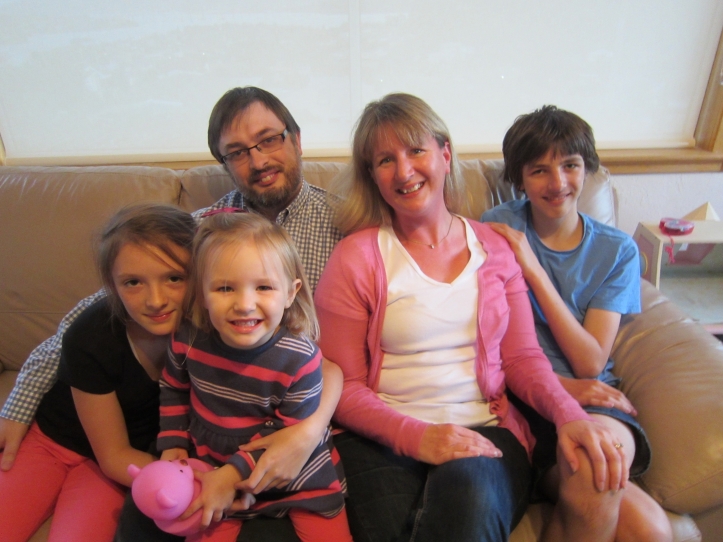 Joanne and Glyn with Quillan, Delphine and Anneli in 2014

The poor nurses had to put up with a lot from me; I wasn’t an easy patient when I was all drugged up!  I had nasty hallucinations, thinking for several days that I was a 3-month-old baby, and that the nurses and my mother were evil, plastic vampires who were out to kill me!  I sang an evil-sounding nursery rhyme, and threatened to chop off all their heads! I had to be restrained in the bed at wrists and ankles, which I think is the funniest thing in the world!  In fact, when a nurse came in to change a line in my groin, I was so convinced that she was going to kill me, that I had another SCA!

But throughout all of this, the amazing team at Royal Hobart kept me going, kept me intact, and kept my family sane and in the loop.

Three weeks after my SCA, and an ICD (implantable cardioverter-defibrillator) later, I walked out of that hospital.  Today my children have a healthy, functioning mother, and my husband – my hero – still has his wife. My only problem now is that it’s just impossible to win an argument with him: “Remember that time I saved your life…?”